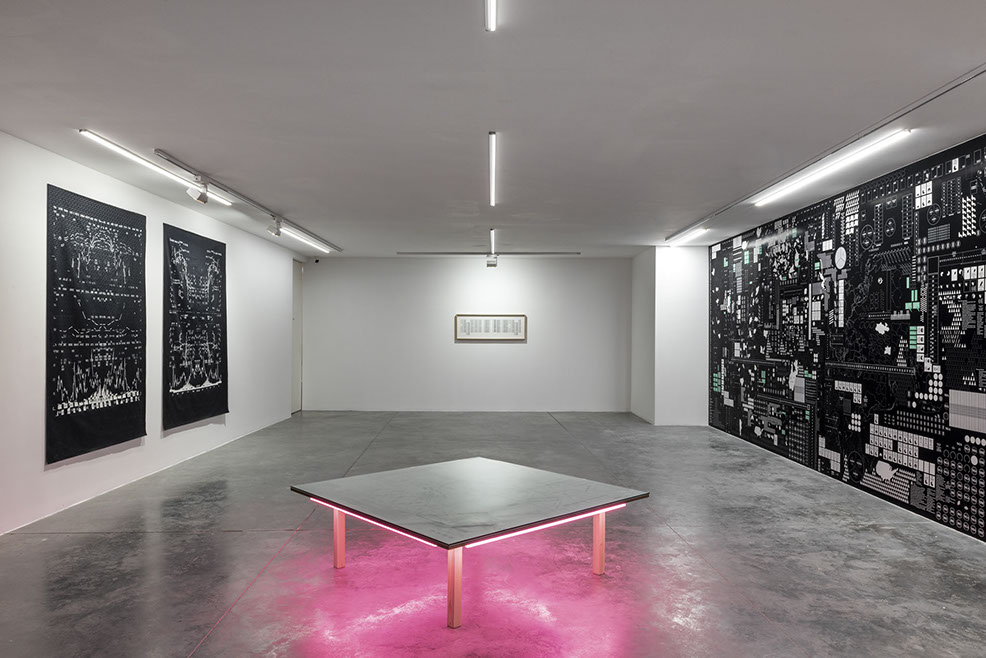 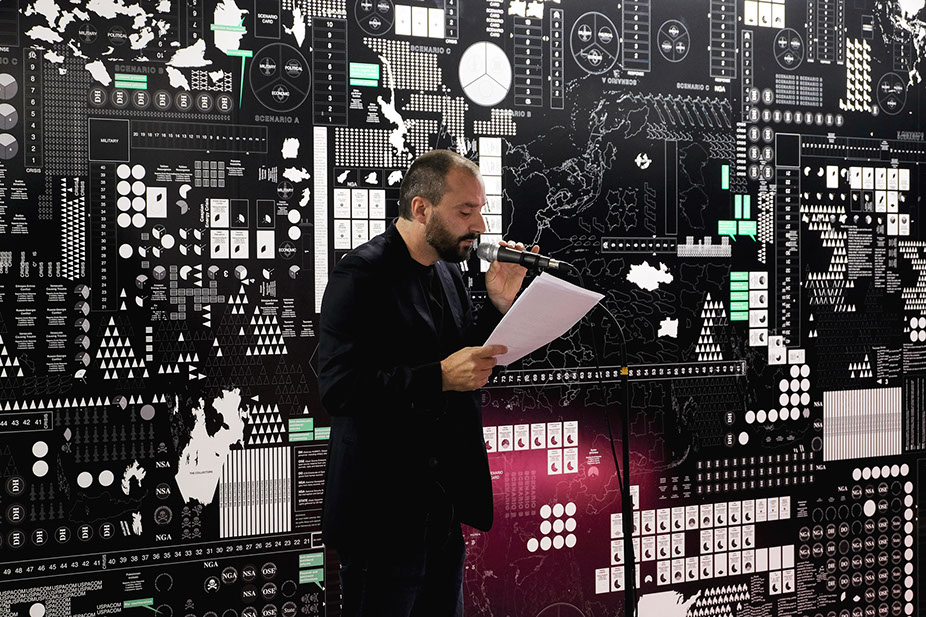 Ludovic Bernhardt’s solo exhibition “The Gaming Room” unfolds in an abstract terrain of the political and the poetic, along with the idea of games as both political and poetic instruments infiltrating our apprehension of reality. The artist captures signs, maps, information units of all kinds, and generates disorienting cartographies of macro flows that expose a range of tools devised by structures of legitimacy and power, but also reflect the entanglement of world-making and the very making of meaning. The works forming the exhibition disturb and dismantle the ideologically-charged process of world-making, for a recombination and recomposition through poetic language.

The exhibition revolves around the idea of games as a training tool, open to speculation and manipulation. Night Music 1 (CIA Game) is based on a board game that was created and used by the Central Intelligence Agency of the United States to train its agents. The artist redesigns the game –perhaps as a “de-training” tool– to deconstruct the elements of war, politics and economics as represented in the game, decentralizing and deterritorializing its vision of the world. Leaking into the operative elements of the game, the work dismantles the preassigned terms, conditions and conditionings, and thus disrupts its intended use and parasites its semiotic context informed by geopolitical and economic interests. The recomposition evokes a chaotic sphere of the global labyrinth for an exploration without apparent rules or a desired end.

In Night Music 2 (Dow Jones, S&P, Nasdaq, EuroStoxx 50, Dax, CAC 40, FTCE 100, Ibex 35, Nikkey, Shanghai, Ibovespa, Hong Kong... Coronavirus spread sinks world stock markets), another game –that of the global stock markets– turns into something between white noise and visual score. The work consists of financial graphics related to the fall of stock markets during the first wave of the coronavirus pandemic. The idea of manipulation appears in its reciprocity: the abstract functioning of the financial system is to manipulate in devising tools to extract human and nonhuman resources and maximize profits, but it can be manipulated itself, as the fragility of the signs shows. The graphics become null through visual abstraction and repetition, as an error, or a glitch within the circuit of techno-financial abstraction.

Coronavirus spread sinks world stock markets 1-2 is also composed by a range of financial data, as a disturbed and parasited matrix, which reproduces and multiplies the crashing effect of a biological agent in the form of a virus, and a financial virus in the form of market signifiers and speculative arrangements. The digital alteration and amplified manual reproduction of the collected information form a visual improvisation, which resonates with the electronic hyperstimulation and the growing sense of social anxiety. Sets to reactivate, adopted from the artist’s experimental writing piece of the same title, is placed onto the crashed signifiers of the financial market, projecting the floating layers of the infosphere and psychosphere. Using the language and aesthetics of news broadcasting, the artist re-mixes and reappropriates this familiar form used in “breaking news” headlines, and the absorbing flow of information.

A series of cartographic experimentation disturbs the strategically designed aspects of maps and games, creating a rhizomatic transcription of events, as reflected in the second version of Chaos Game. It is an intentionally dysfunctional board game that raises questions around the Haitian Revolution of 1791-1804, the first successful slave revolt resulting in the independence of Haiti. Known as a sugar island, Haiti was a French island colony which was one of the largest producers of sugar cane, and the main destination of slave trade at the time. The eighteenth-century world market for sugar, or the “white gold”, was built by competing colonial empires, through the institution of slavery, as it drove trade in goods and people and fueled the wealth of European nations. The work implies a disorientation with the graphic and geographic codes to form a “chaos-cartography”, connecting it to a wider web of significance in relation to the capitalocentric imageries of the world. In the concrete poetry Ruins, Ruines, Ruinen, the artist, by using the very signs of an accumulative erosion, conveys a paradoxical tension within an artistic-poetic construction: a process of (de)construction with ruins.

In reference to William Burroughs’ speculation that the language itself is a virus invading and transforming the organism, Franco ‘Bifo’ Berardi asks whether it can precisely be a virus to reconnect language with sensibility and concreteness of the material world. The virus, he asserts, is part of the complexity of chaos that overcomes our ability to understand and govern, it is the exercising of poetic imagination that transforms the set of what is probable. Not a utopia, but a reconfiguration of what is possible: “Poetry introduces a-signifying fragments of a chaotic decomposition and a chaosmatic recomposition of meaning into language.”1

The Gaming Room has a poetic dimension that marks the exhibition as an experience of rhizomatic networks, felt also in the multitude of narratives that are woven among the pieces that compose the exhibition. The artist takes the indicators of economic and political speculation, and (de)fuse them with linguistic and artistic speculation, opening the works up for a personal, and possibly, collective imagination: an ambiguous yet emanating state of becoming. 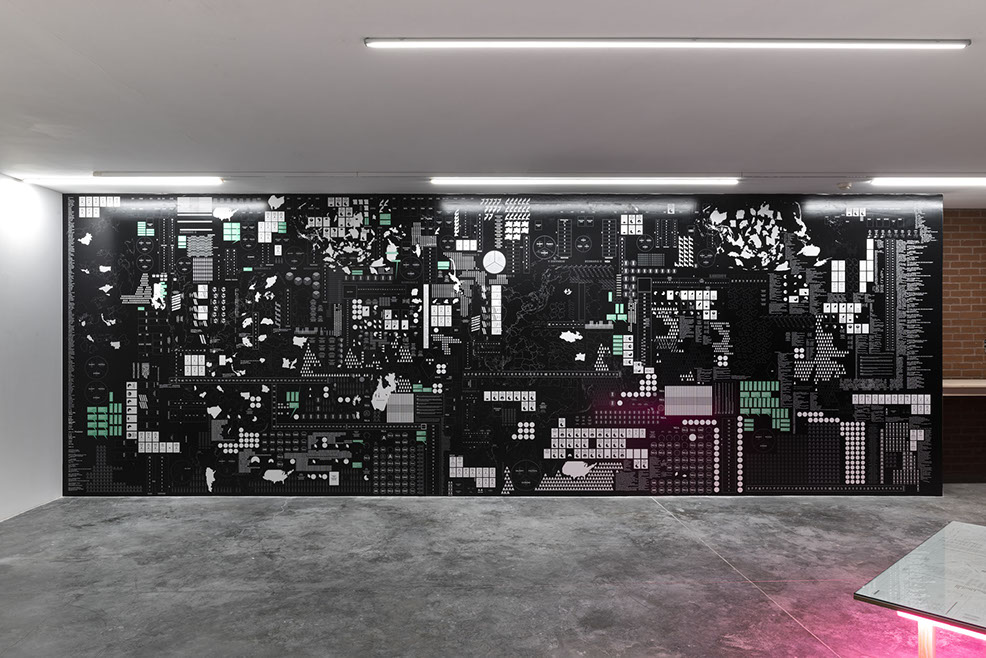 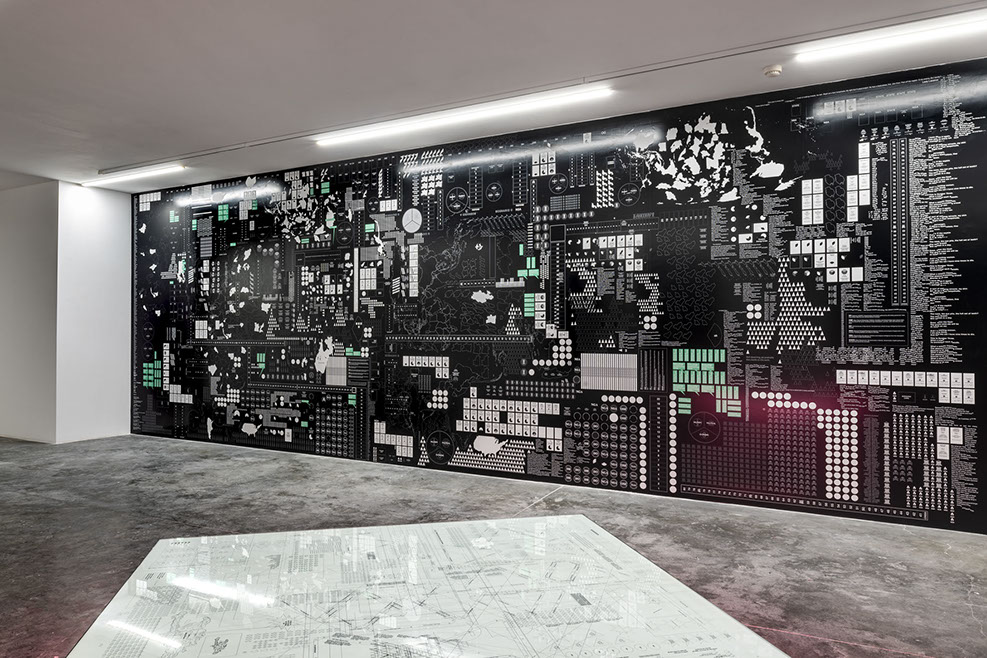 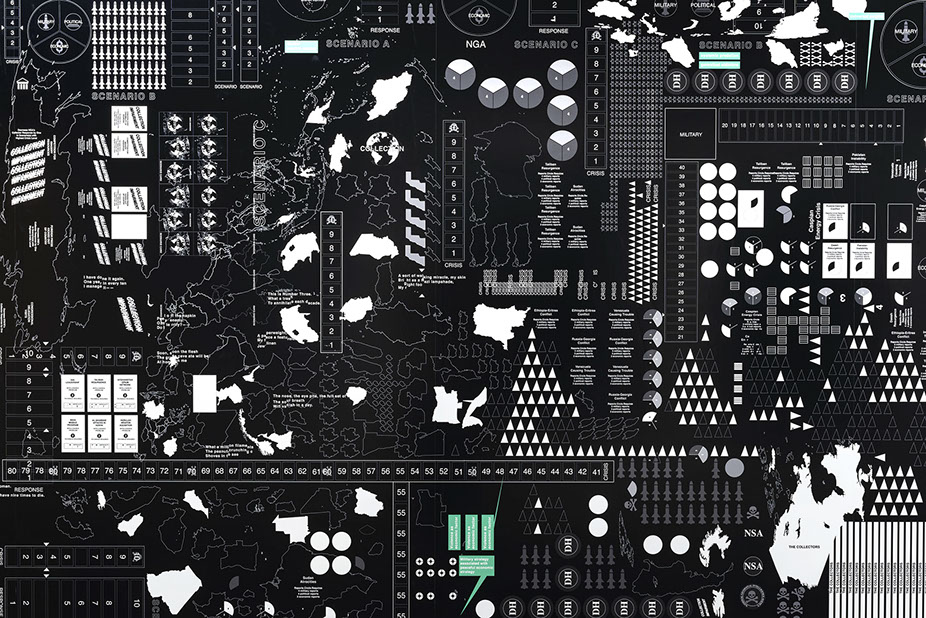 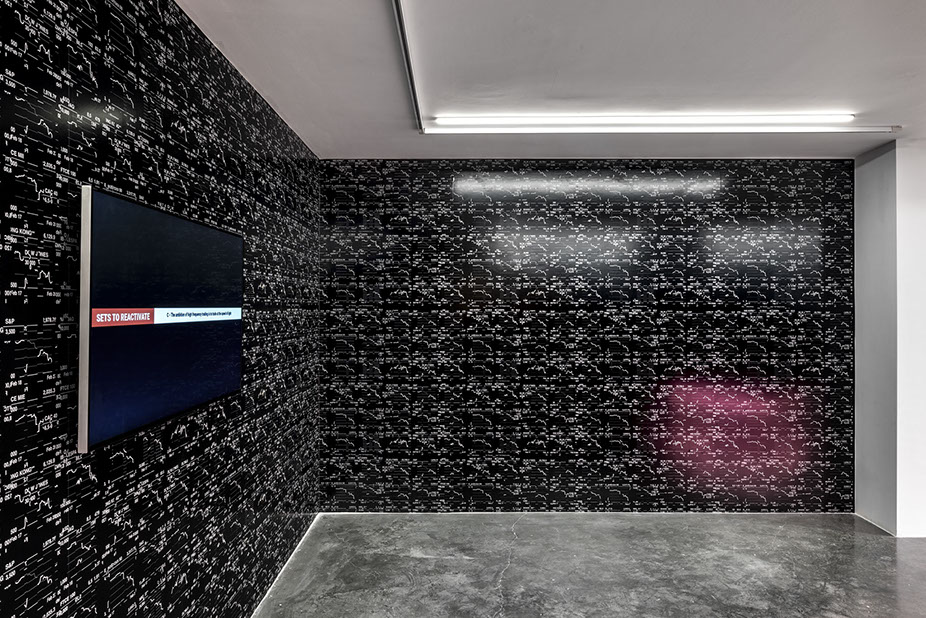 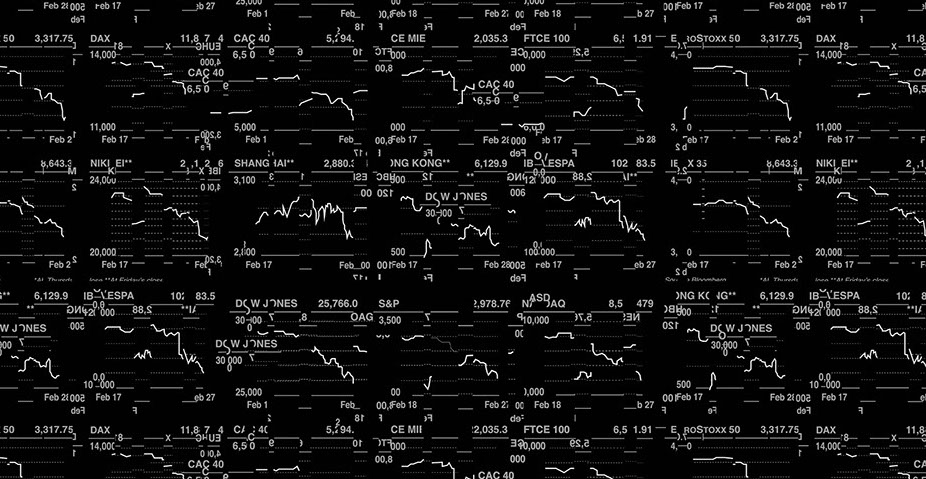 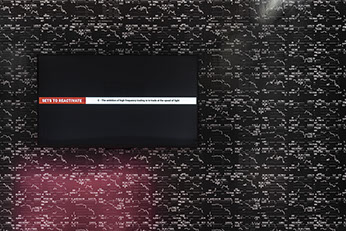 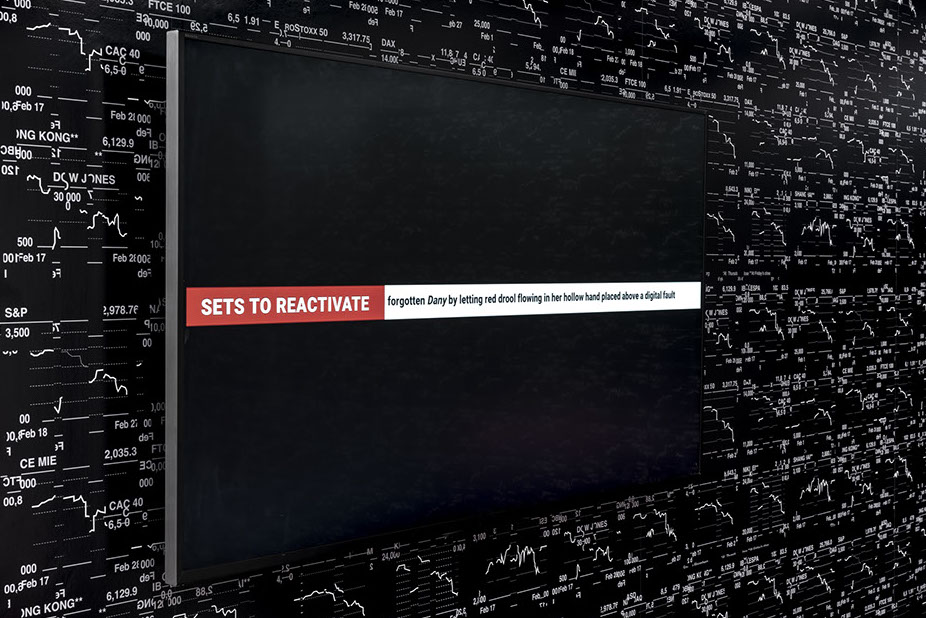 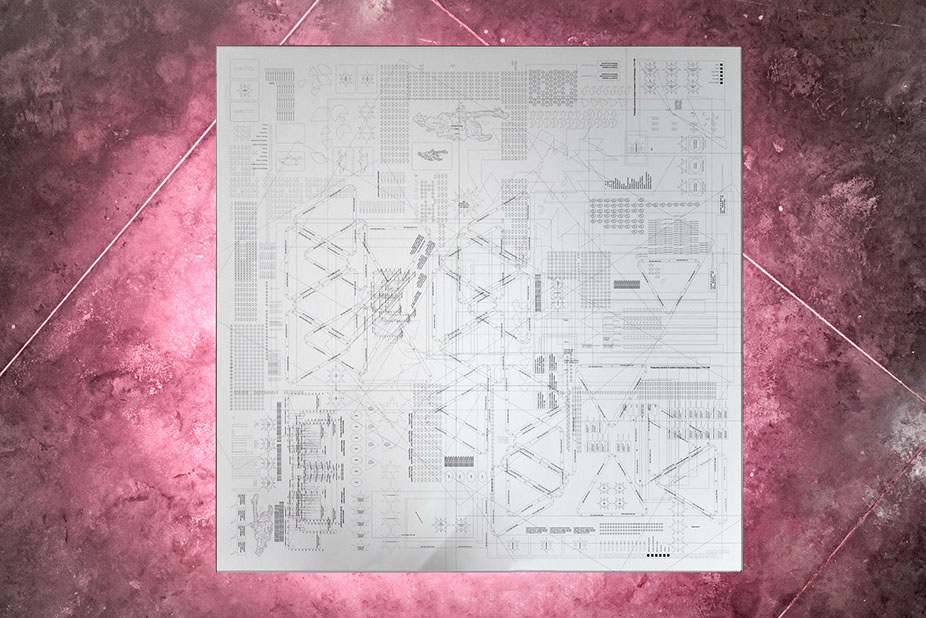 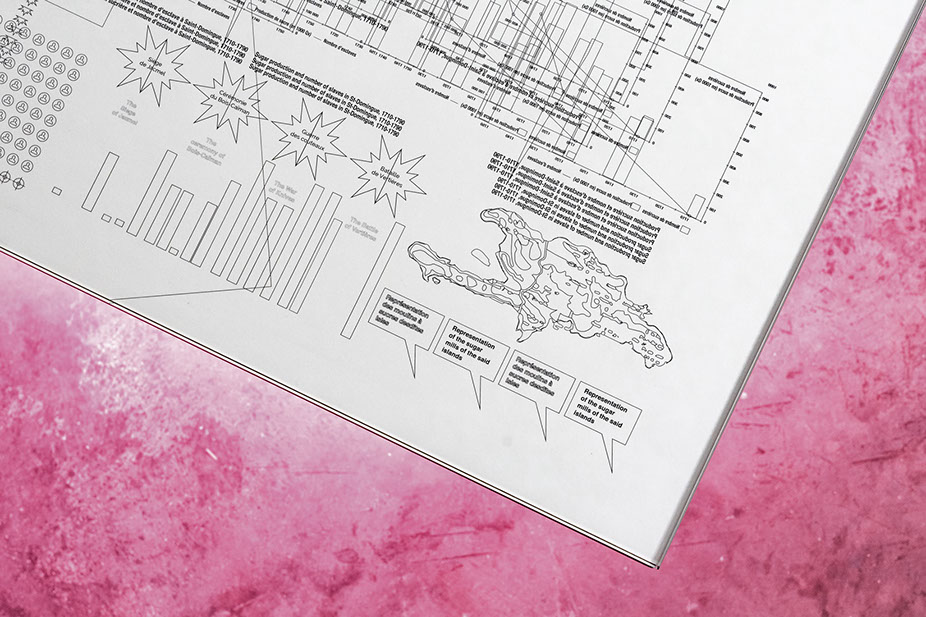 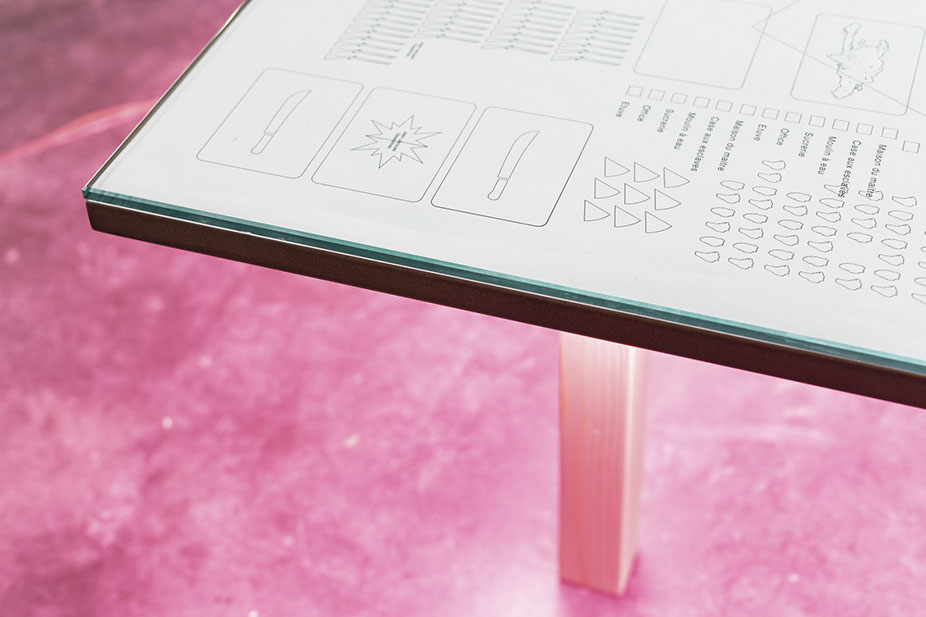 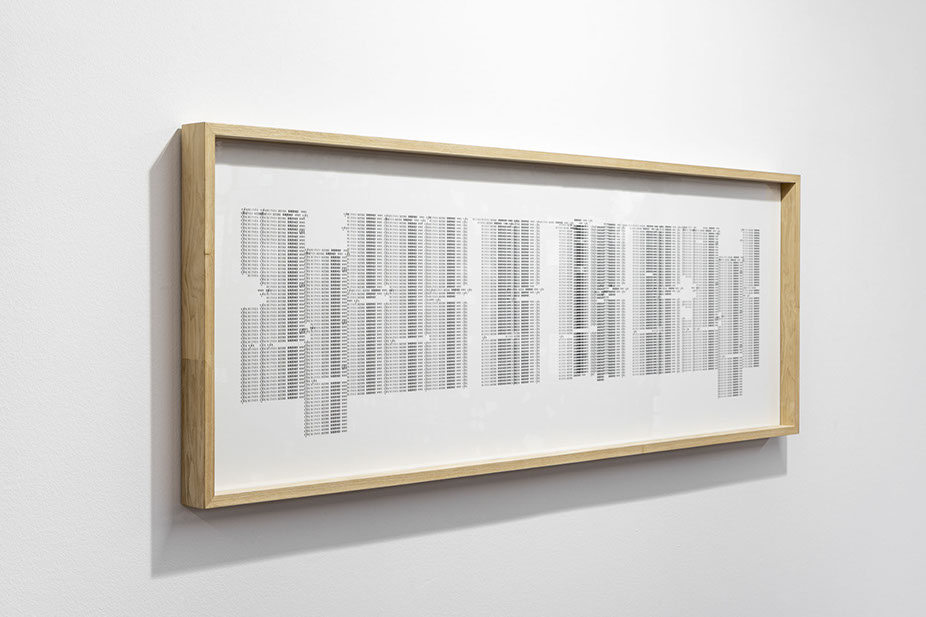 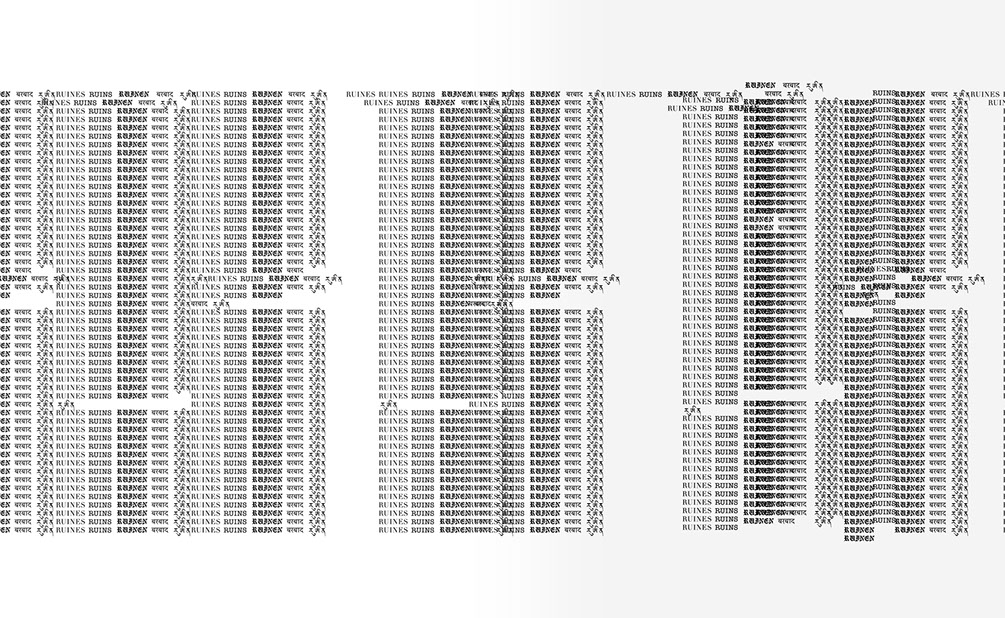 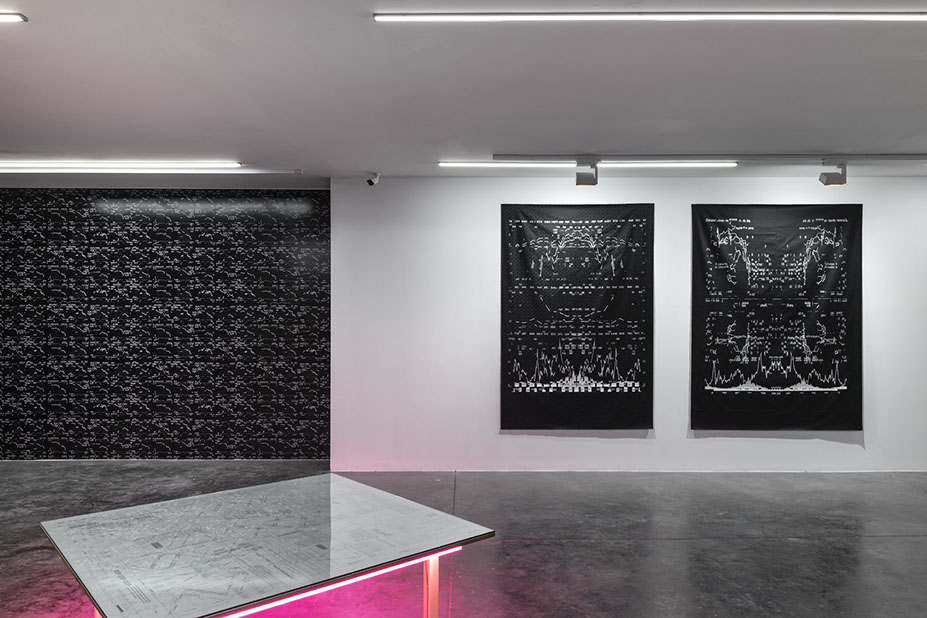 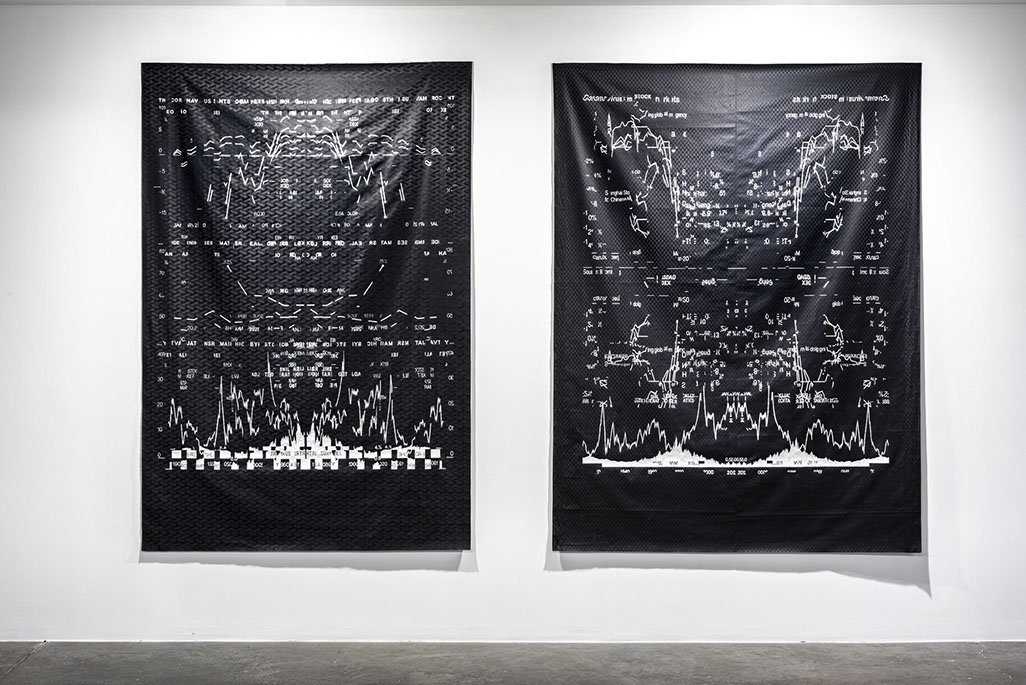 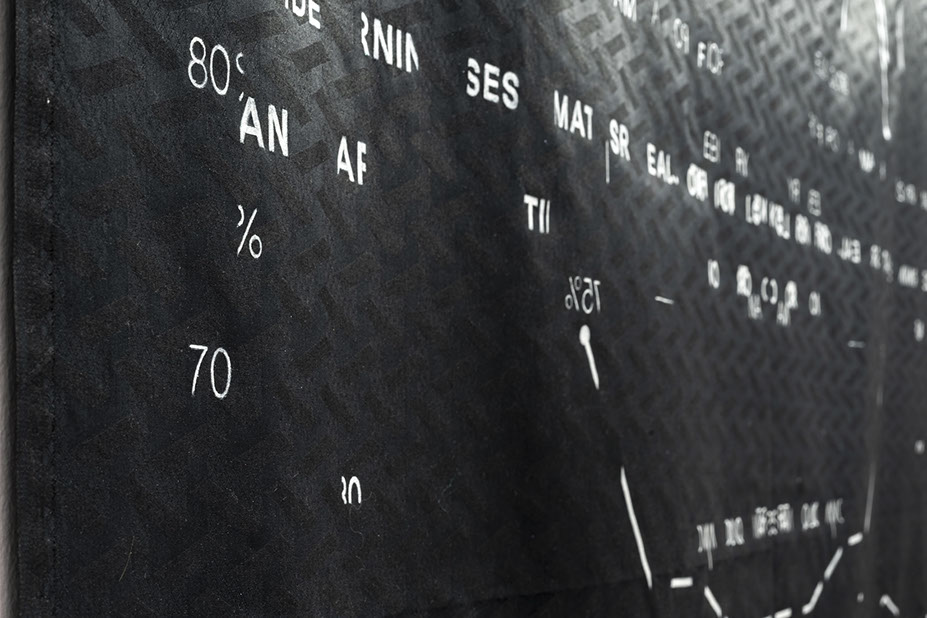