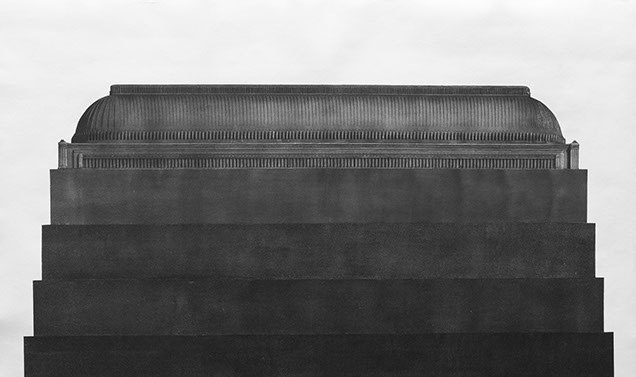 Text written for the catalogue of Erol Eskici exhibition

Erol Eskici’s work can be deciphered as a discrete word, pronounced implicitly, away from sweetened uproars in art. It contains many secret noises pertaining to a slightly narrative and often enigmatic vocabulary like that of a child. When the viewer approaches the rustling, a loud darkness appears; it is a muted noise, both near and far, caused by invisibility itself, opposed to social fact and its infinitely oppressive structures. Thus there is, no doubt, a political statement within this density, orchestrated by the game of light and shadow.

Let us take the set of portraits from “Construction of Generation – Subjects” series as an example. This work is based on the use of student photographs collected from a yearbook from the 80’s. From this, Erol Eskici develops a gallery of painted portraits, anchored in the recent past of the Turkish nation loaded with ideology. The choice of this yearbook is caused by the artist’s political substratum; it is an effective weapon of nationalism overwhelming the youth. The uniqueness of these images stem from the cutouts, the holes made by the artist on the faces of the children pinned down by the institution. These gaps are abysses in which the viewer and the subjects are isolated; where the memory and the history go astray; which open to other gaps inserted into other faces. There are as many holes as there are lost subjects. Yet, the faces get reunited; they emerge from under the damaged layers. So, here we speak of the construction of generation and thereby ‘worklessness’ (see Blanchot) involved in the very construction of the work and its subjects. It thus seems that Erol Eskici takes the side of the negative in order to castrate patriarchal fantasies of the Nation-State which reduces the individual to a mask. Considering the weight of history -in Turkey and elsewhere- with its multiple exploitations against the structure-architecture of the ideology of language, these are eminently violent images.

Thus, the subject is at the heart of the work. “Construction of the Family” pursues this question in another way: It is another type of relationship with generation and social group. A collection of paintings hung symmetrically, building an almost anecdotal family stability; an apparent solidarity of subjects rejoined to the community that defines them. Perhaps it is the exposure of an ironic and macabre structure where the phallic space of the masculine construction goes with the dictated rules of the genealogy, from birth to death. The inevitability reigns in this set which can be humorous too: A simple ball (the bubble-man), and a kind of breath make fun of this row of spectra (mostly male). Here again, the social content is painfully pressing on the back of the subject, who can presumably only murmur, or just let out a vaporous and formless cloud.

Now let us talk about critical philosophy, a field that Erol Eskici puts forward in his reading of artistic and social realities. Thus, the concept of dispositif, claimed by the artist, can give us some keys to understand his images better. According to Foucault, and Agamben after him, the dispositifs are all these power structures; institutions, schools, discipline, armies which socially organize the bodies of individuals by certain types of constraints and/or relationships. The dispositif is in the heart of the critical sensitivity of Eskici. Indeed, to go a little further, what he retains from the concept of dispositif is, I believe, its binding relationship with the childhood and its submission to the dictates of the ideology of the adult world; the necessary reconstruction of childhood could, thus, be done in the art (‘Reconstructing childhood: A critique of the ideology of adulthood’, Ashis Nandy). Therefore, most of the images produced by the artist interrogate the dispositif -a concept dear to him as he inserts the notion of power into intersubjective relations- while highlighting the urgency of the reconstruction of childhood. And it is here that we see the burden of refreshed memory and childhood as a political universe per se. If childhood is the subject of a representation dominated by adults, then art must rebuild the world of childhood without adults. Thus, the anamorphic face can be seen as a metaphor of a stretching or even the distortion of childhood by the ideology or dispositif, and its necessary reconstruction by the artist. The miniature representation of certain characters (wall-fence, Sisyphus…) or on the contrary, the shifted scale between certain characters within their context (“Nostomania”) can be understood through the lens of childhood confronting adulthood: There often prevails a relationship of fracture. So do the eyes of this little girl behind her gloomy window in a dilapidated house, facing the frozen bird. The “Nostomania” series (a term used for the abnormal form of nostalgia, an irrepressible desire to return to live in the place where one’s childhood was spent) is quite close to a nightmare and its uncanny strangeness.

Another motif with political echoes and haunted by the world of childhood is Architecture. “Sublime”, “The anamorphic architecture of fascism”, “Construction generation”, “Nostomania”, “Unititled”… In all of these works, that motif takes different forms. One time, the architecture appears as a gigantic tower (reminiscent of the Tower of Babel); another time it stands as a pre-fascist building erasing personality of individual (it might evoke the neoclassical architect Étienne-Louis Boullée). In another painting it triumphs as a temple-prison overlooking the hill (a kind of Kafkaesque castle); or, it is established in a set of Hindu temple columns, becoming a mental sanctuary and accumulation of time’s sediments. However, it can also show itself as hut or lodge lost in the woods; a dollhouse or a disasterous ruin; and finally it is built as a maze and tracery (a much more abstract construction), a scheme punctuating this wide range of buildings. Architecture is, therefore, used as a representation of power, order, law, the adult world and their ideology. Impregnable walls. Unyielding citadels. Inaccessible mountains or towers. Irresolvable networks. (see the text of George Bataille written in 1929 on architecture as the opposite order to the multitude (1)). And, given that, in opposition to this State architecture, we have architecture as a child refuge and as in Blanchot’s “The Writing of Disaster” it is an aperture towards the wild land, ruin and nature, cohabiting with darkness and its nocturnal story. The construction is therefore linked to the dispositif. The tower or the myth of Sisyphus, are both references to the world of order and to the inclusive institution. The doll house is, in turn, nestled in tall grass or in the shaky nest of a bird. Much more fragile, much more intimate. All of these buildings form a coherent whole, based on the dialectic of refuge and exclusion. It is, all at once, the inclusive basis of the institutions « that capture everyone’s time » and excludes the individual from the institution’s time (see Hoffman among artist’s references). But they are also niches of protection and a reconstruction of an alienated or excluded individual identity.

Erol Eskici’s images open a graphic know-how based on the patience of the development of structures and niches invaded by the depths of the shadows and lit by the place of the subject. Reflecting on ideology and power, he constantly looks to the place of the individual in more or less ruined, dark, unstable shelters –which are somehow all protectors. Not impenetrable cocoons but melancholic bubbles, struggling against transparency.

In this exhibition, let us not deceive ourselves; the bases are literary as well as pictorial. We can understand this, with a detour, through the writings of Maurice Blanchot and his reflections on creation. It reminds me of the notion of worklessness, considered by Blanchot as a kind of writing developed by the retirement of the work and its nocturnal disaster (2); which does not prevent the work, since there may be worklessnes in the very act of creating the work.

(1) “Thus the great monuments rise like dikes, opposing the logic of majesty and authority for all disorders elements: it is in the form of cathedrals and palaces that the Church or the State address to and impose silence on the multitudes. It is obvious, in fact, that monuments inspire social wisdom, and often, a real fear. The storming of the Bastille is symbolic of this situation: it is difficult to explain this crowd movement by something other than animosity of the people against the monuments which are their true masters.” Georges Bataille, ‘Architecture’ part in his ‘Dictionnaire critique’, 1929

Translation from the French by Nilüfer Sasmazer.